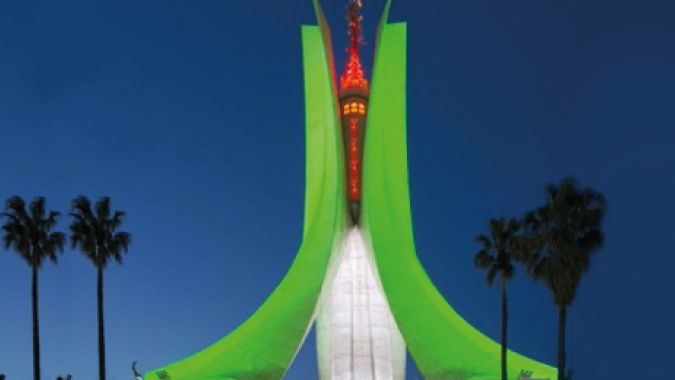 The Maqam Echahid is an iconic landmark commemorating the Algerian war for independence.

The monument is made up of three massive concrete palm fronds that come together and soar 92m into the sky, representing the coming together of agriculture, culture and industry to make Algeria great.

Inaugurated in 1982, the memorial is an ever-present backdrop to the city, helping to shape its identity.

At the base of the monument is the National Moudjahid Museum and an open plaza where concerts, events and exhibitions are organised on a regular basis.
This landmark is also the most visited tourist attraction in the city and a popular spot for families on Friday and Saturday afternoons.

In 2017, the local authorities decided to install a new lighting system that would enable them to easily create a remarkable nocturnal landmark to mark special events.
A number of challenges had to be tackled to find a solution that would evenly illuminate this colossal monument, discreetly integrate the architectural setting, incorporate an unobtrusive electrical installation and be sustainably and economically viable.

Schréder proposed a solution incorporating the OMNIblast, SCULPflood and Poss floodlights that would enhance the structural design of this symbolic monument, reduce power consumption to a minimum and avoid unwanted light.
During the concept design, a number of computer models and on-site mock-ups were made to communicate the idea to the local authorities.

The OMNIblast floodlights are mounted on 6m high masts at 10m from the monument to ensure a uniform colour on the concrete façade and minimal glare for users of the space.

The SCULPflood 150 floodlights are installed inside the monument to illuminate the turret while the Poss uniformly grazes the dome.
All of the floodlights are managed by the DMX protocol via a Pharos controller to enable the city to easily adapt the colours for specific occasions.

The monument is now a truly striking focal point on the heights of Algiers that can be enjoyed by the local population and visitors to the city.