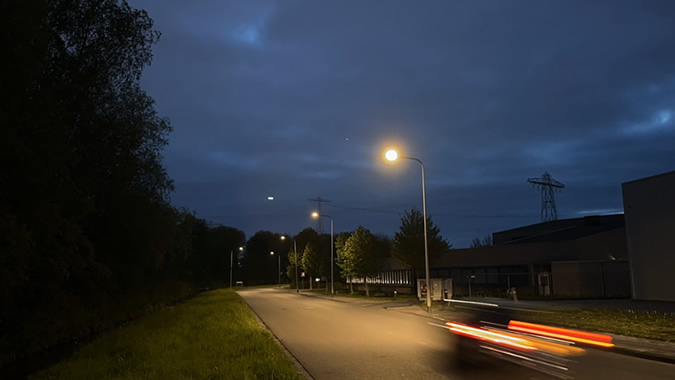 The city of Groningen has been chosen to join a European Union initiative which aims to create 100 climate-neutral, smart cities by 2030. Taking part enables the city to be at the forefront of the transition to carbon neutrality and the fight against climate change.

As part of its strategy to achieve its targets, the city has already upgraded its 9,000 fixtures to more energy-efficient LED luminaires to reduce its carbon emissions. It is now looking to go further and implement scalable technology for a more responsive lighting network. It realises that while the city centre and certain specific areas need well-lit spaces all night long, other areas need less light.

By dimming the light in these areas when few people visit, they can further minimise energy consumption and thus carbon emissions. Less light also means less light pollution which will enable Groningen to preserve its dark skies and its natural environment.

One such area is the Eemspoort Industrial Estate on the south-east side of Groningen. While traffic in the area is quite dense in the mornings and early evenings during the week as people make their way to and from work, there are very few vehicles during the night and at the weekend. The city decided to set-up a pilot smart lighting scheme in this area lit by TECEO luminaires. It would only fully light the roads when necessary to ensure safety and dim the light during the night. It wanted a scalable lighting system that would enable it to streamline operations and evolve in the future.
Latest generation controllers for efficiency and performance

All 70 of the TECEO luminaires lighting the streets in this area were fitted with the latest generation Owlet IV Zhaga controllers and connected to the Schréder EXEDRA platform. These controllers use mesh and cellular technologies to facilitate a faster and more efficient communication between the nodes and the cloud for real-time monitoring and control. This type of architecture also means that cities no longer have to deploy gateways in street cabinets.

With the Zhaga-D4i certified Owlet IV controllers and the open and interoperable Schréder EXEDRA platform, the city will be able to connect sensors and other devices to optimise operations and create a hub of connectivity for smart city applications.

Smart lighting in no time at all

Thanks to the easy installation and fast plug-and-play commissioning of the controllers, the entire system was up and running in a matter of hours. The local authorities could immediately monitor the luminaires in the Schréder EXEDRA platform and start gathering data which will give them valuable insights for managing the network in the long term.
An optimised lighting network

The luminaires are dimmed at night when there is less traffic to save energy and preserve the dark skies. Specifically, the light levels are programmed to dim to 70% at 7pm when most people have gone home and then to 60% from 9pm to 11pm. Subsequently, the light is dimmed even further to 50% throughout the night before increasing to 90% early in the morning when commuters are arriving. The local authorities can adapt the light levels through the Schréder EXEDRA platform whenever they want to ensure safety and comfort for people.

The platform will ensure that operations are optimised throughout the lifecycle of the installation. In the event of a failure, the controller will send a notification to the Schréder EXEDRA platform. Even if the failure is linked to a power supply problem, thanks to the Last Gasp function, the notification will be sent to the platform, giving the city an immediate overview of the problem. This function is important for areas like business parks and industrial estates that often have no-one around at night.

With the Schréder EXEDRA platform, the city of Groningen is able to provide a safe environment for commuters and reduce its energy consumption, driving down unnecessary costs. A lower energy consumption also means a lower carbon footprint to help the city achieve its carbon-neutral targets.

The city will use the knowledge and experience gained from using the new smart lighting in Eemspoort Industrial Estate for the rest of the city so it can lower emissions further and create a more sustainable future.