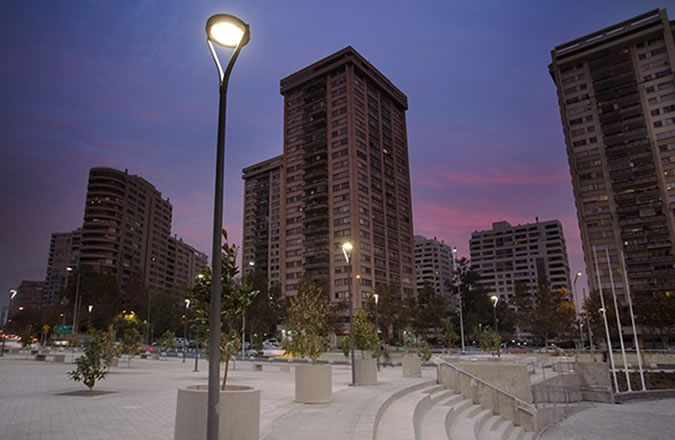 Santiago is a thriving city having benefited from the country’s economy growing strongly in recent years. However, this growth in urban development combined with an increase in the number of vehicles has resulted in serious traffic issues for the city. In 2013, the Ministry of Public Works began working on the Downtown Santiago Building Program to decongest traffic in the main urban thoroughfares of the Chilean capital. The Kennedy Tunnel was constructed below Kennedy Avenue at the Perez Zujovic Roundabout with an exit at Nudo Vespucio. The Americo Vespucio Park had a design overhaul to improve connectivity and access for pedestrians. In fact, the area only had one badly lit path for both pedestrians and cyclists, so that people passed through as quickly as possible. Green areas, pedestrian crossings and paths were built. It was vital to light these areas well at night so that people would want to take advantage of the new urban infrastructure.

The local authorities wanted a sustainable lighting solution with LED technology that would guarantee a feeling of safety and comfort.

Schréder was entrusted with providing a lighting solution for these newly renovated public spaces. The lighting not only had to ensure safety with minimum energy consumption but also create a harmonious nocturnal identity.

The Yoa, (24 LEDs – 55W) with a symmetrical optic, was installed to light the pedestrian zones while the Teceo (24 LEDs – 55W), with an asymmetric optic, lights the pedestrian crossings.
The lighting connects the spaces, creating a pleasant ambiance and a feeling of openness for a well-balanced nocturnal skyline. The public is delighted as the redesign means that they now have a real public space where they can pass through leisurely or spend time.