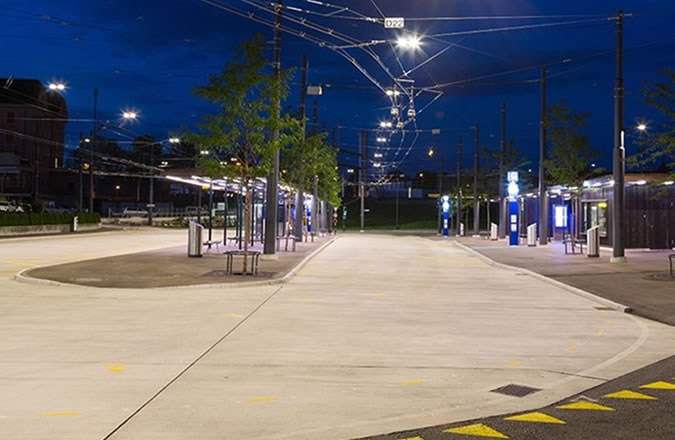 Urban redevelopment projects are crucial to the success of a city to stimulate the economy, instill a sense of civic pride, improve mobility and help businesses. In 2012, the local authorities in Lucerne, launched such a project to renovate the area to the north of the city. New living and office spaces were created, flood protection measures were implemented as the city had been badly affected by floods in August 2005 and the road infrastructure was overhauled. A new roundabout was built, while the roads in and around Seetalplatz – the city’s central transport hub – were renovated to accommodate the 50,000 vehicles a day, 5 bus lines and increasing number of cyclists making their way through the area. The new road network has significantly improved the public landscape, creating more secure and comfortable urban spaces for all users.

Light was a key element in the success of this project. The Teceo and Dexo luminaires, which had already proven their efficiency, reliability and cost-effectiveness in the region, were chosen by the project designer to light the new urban spaces.

More than 240 Teceo luminaires on Ito brackets light the main roads. This aesthetic ensemble diffuses a bright white light for optimal visibility while providing a clean and modern design that reflects the new identity of the area.

Just over 100 Dexo luminaires were installed on the catenary cables, providing a soft white glow to light the bus lines and stops. They contribute to people feeling more secure, encouraging more use of the public transport.

The residents are delighted with the transport infrastructure that has been adapted to their needs and eased congestion, with the new luminaires providing an enhanced experienced for travelling in the area. The local authorities are also pleased with the new lighting as it has not only improved safety but also enabled the city to reduce energy costs and its environmental footprint.