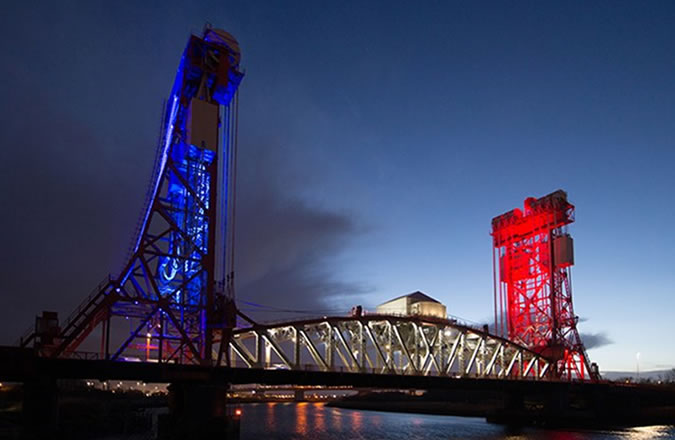 SCULP floodlights illuminate this bridge to create an iconic nocturnal landmark; a symbol of the Tees Valley’s industrial heritage and identity

The Tees Newport Bridge is a vertical-lift bridge dating back to 1934. It spans the River Tees, linking Middlesborough with Stockton-on-Tees. The number of ships needing to sail up to Stockton-on-Tees declined over the years, and the bridge performed its final lift in 1990. Today it still serves as a road bridge, with considerable traffic coming through along the A1032.

In 2014, the bridge celebrated its 80th anniversary. While there was an existing lighting scheme, Stockton Council wanted to implement a modern, energy-efficient LED lighting network to make the bridge an iconic landmark.

Stainton Lighting Design Services (SLDS) were experimenting with the ideal luminaire to light the structure, as the bridge’s complicated design presented unique challenges. Having worked together on several previous projects in the area, SLDS invited Schréder to a night-time demonstration in 2016 – along with representatives from several other lighting manufacturers.

A range of products were tested at the demonstration to see which would best meet the requirements of the project. Schréder presented its SCULP 150 and 60 floodlights which – with their powerful optics – would be able to light the intricate bridge. Following the demo the project was put out to tender, with the SCULP luminaires selected to light Newport Bridge.

The SCULPflood 150 provides wide beam light distributions for large architectural structures, while the SCULPflood 60 medium floodlight is a compact luminaire designed to blend into the environment.

In total, 120 SCULP floodlights were delivered to site in early 2017, after which a second tender process occurred for installation. Powercare Electrical – a local Teeside company – were chosen to handle what was to become one of the largest SCULP installations in Europe.
The lower half of the bridge had limited space, requiring smaller LED lanterns that would still be powerful enough to light a large surface area. The SCULPflood 60 luminaire – with its vertical, elliptical lense and small size – provided greater control over light distribution compared to the other products that were tested and was much easier to install.

A DMX scheme was implemented to allow the SCULP floodlights to change colour, giving the local council flexibility in choosing between any combination of red, green, blue and white arrangements – allowing for block colours or pre-programmed displays for special events.