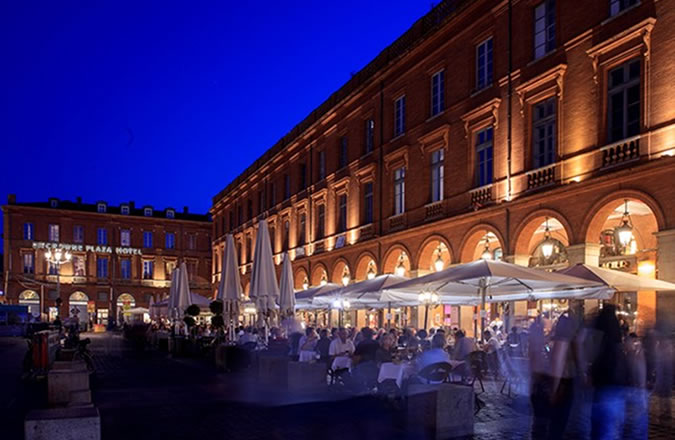 Place du Capitole, the vibrant heart of Toulouse, has a different kind of glow after sundown. The old lights that cast an orange tint on the square have been replaced as part of the city’s lighting master plan. Launched in 2015, this plan aims to brighten up the streets of the pink city, reduce energy consumption and operating costs and enhance the local heritage.

Steeped in history, this square is the largest in the city, covering 12,000m². It is home to the famous pink stone building with its neo-classical façade, le Capitole, which houses the city hall and the national theatre. Restaurants and cafés line three sides of the square, each giving a splendid view of this landmark. It is, without a doubt, the focal point for many public events.

The square was lit by 70 traditional style lanterns fitted with high-pressure sodium lamps (100W). The city wanted to keep theses lanterns that preserve the historic and emblematic character. Schréder provided LED optics incorporating white LEDs (2,700K) that diffuse a warm white light to create a welcoming nocturnal ambiance. With an average consumption of 51W, the LED optics have reduced the energy consumption by almost 50%! The lighting can also be adapted according to activities taking place on the square.
POSS floodlights were installed under the 29 arches surrounding the square to enhance the superb frescoes on the ceiling, which outline the history of the city and its region. The floodlights are fitted with an extensive optic, which has enabled the city to cut the number of floodlights in half (2 floodlights were previously installed per pillar), thus reducing energy costs by 50%. Painted the same colour as the bricks, the floodlights discreetly blend into the walls, providing a much better colour rendition to reveal the stunning colours of the frescoes.
The city is delighted with the new lighting, which has contributed to creating a truly safe and vibrant landscape in keeping with the local heritage while significantly reducing its energy consumption and carbon footprint.