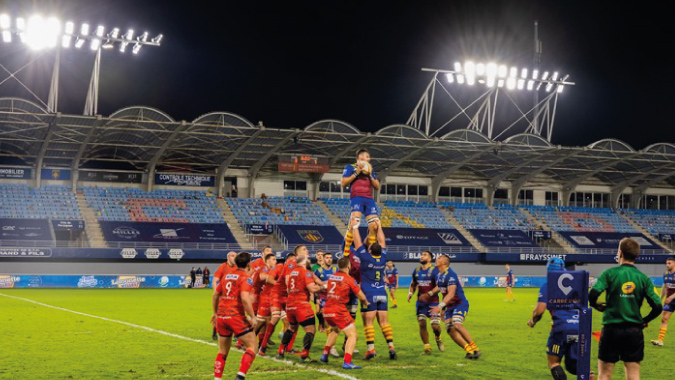 The Aimé Giral Stadium is the stronghold of the Union Sportive des Arlequins Perpignanais (USAP) rugby team, the pride of the city thanks to the many tournaments the team has won. Founded in 1902, the team competes at the sharp end of French rugby and has been training and playing its home matches in this stadium since it opened in 1940.

Fully enclosed, with a seating capacity of nearly 14,500, the stadium has benefited from numerous renovations in recent years to meet the standards of the French National Rugby League (LNR). In 2021, the club managers decided to upgrade the lighting to:

Following an audit of the stadium, we drew up a customised lighting plan with a mixture of photometrical optics to deliver a uniform lighting on the pitch, solving the problems arising from shadows.

We proposed a mixture of OMNIBLAST 2 and OMNIBLAST 3 floodlights. These low-energy floodlights deliver a high-quality light to ensure excellent visibility, a high colour rendition (CRI) and television lighting consistency index (TLCI 85+) to ensure vivid images for fans watching at home.

With low maintenance requirement and a long life span, they offer a good return on investment for the club.

Designed for the fans

With a fervent following, it was important for the club to create a memorable experience for the fans. All of the floodlights are controlled by the DMX-RDM protocol which enables each fixture to be switched on and off individually or synchronised in light shows, to create an exciting atmosphere in the stadium on match day.

The floodlights can be adapted to deliver 3 different lighting scenarios depending on whether the junior or professional team is training or playing matches:

By adapting the light to the different events taking place, the club ensures optimal visual comfort for all of the players and fans while saving energy.