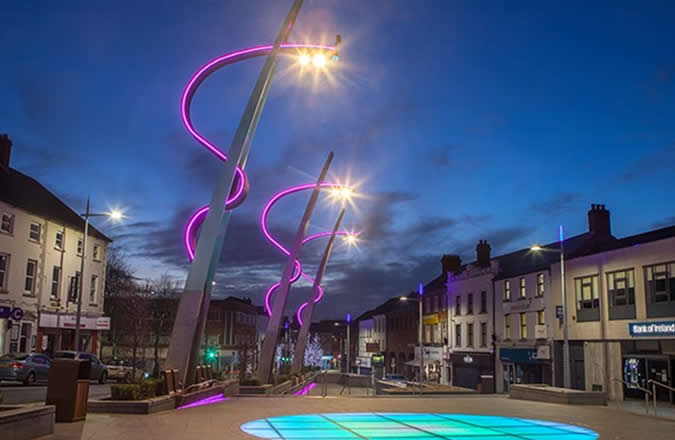 Lisburn is the third largest city in Northern Ireland and is the birthplace of Irish linen, which for many years was the most prominent linen producing industry in the World.  Still proud of its historic identity, shapes of linen has continued to be replicated in many forms throughout the city.

When Lisburn City Council began a bespoke lighting feature project, it was important that it incorporated the swirling patterns that feature so prominently across the city.

Working with local architects, The Paul Hogarth Company, Urbis Schréder was appointed to supply 44 bespoke feature lighting columns, to be installed in the centre of the city, and leading up to the Irish Linen Centre.

Forty of these columns were eight and ten metres high.  The frame constructed from stainless steel, with a corten steel strip running through, creating the swirling effect of linen.  A strip of LEDs ran through the centre of the corten steel, each with a cast acrylic spike on the top lit with further LEDs.

Twenty columns included an ornate cast tapered base of stainless steel, designed to display textured banding, a concept taken from the ‘threaded bobbin’ aspect of the linen industry.

The most prominent element of the project are four 14 metre bespoke columns.  The seven ton units are complex structures and consist of a mixture of corten steel, stainless steel and mild, painted steel.

The overall result is truly unique and represents the rich cultural heritage of the historic City of Lisburn.