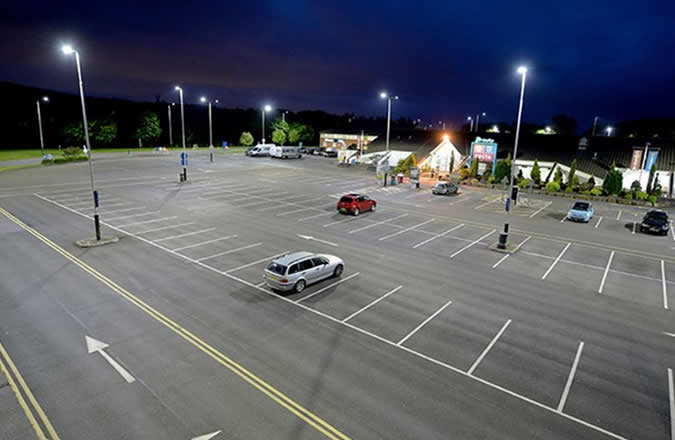 As part of the company’s wider initiative to significantly reduce its carbon footprint, Moto commissioned its lighting partner, Altitude Services, to analyse the impact LED lighting columns would have on several of its sites. Having worked with Schréder on numerous lighting projects, Altitude Services asked for our support in researching the benefits that modern LED luminaires could have on the site at Woolley Edge.

A detailed anaylsis of the Woolley Edge site in early 2017 showed that the company could significantly reduce its energy consumption on-site by between 50-70 per cent by replacing the existing lanterns with LED luminaires. With this potential for substantial energy and cost savings, the move to LED technology offered a viable return-on-investment for Moto.

Ampera luminaires were installed on both sides of the motorway; 32 Ampera Midi and 8 Ampera Maxi at the northbound site while 41 Ampera Midi and 5 Ampera Maxi light the southbound site.
In addition to a car park and pedestrian walkways, Woolley Edge service station also has an extensive lorry park. By utilising the wide range of photometries available with the Ampera LED, the luminaires were installed with low inclination to project the light further than was previously possible. This reduction in upward lighting enabled each bay to be lit by a single column, compared to the previous lighting scheme which required two lanterns for every column.
The luminaires at Woolley Edge have been pre-programmed with dimming schemes to ensure that the site is never over-lit, but that drivers and pedestrians can manoeuvre around the site safely and securely.
Altitude Services completed the on-site installation of the new columns in May 2017, five months after the project began.

Robert Westwood, Commercial Manager at Altitude Services commented: “The LED regeneration at Woolley Edge marks the beginning of wider regeneration projects at Moto service stations across the country. Having worked with Schréder on numerous lighting developments, I never fail to be impressed with the quality of its LED solutions and the professional, efficient nature of its team of lighting engineers.